In August of 2016, I finally made it to North Carolina with my recreational dive buddy, Rich Paye. It started out with the long drive from Long Island to Morhead City where were booked to dive with Olympus Diving Center. The drive was nothing really to speak of except for the excitement of finally going to dive the wrecks of North Carolina which we had both been talking about with each other for a few years but never had the time to do so.

The following morning we made our way to the dive shop and introduced ourselves to the staff and took care of all of the typical waivers and paperwork and what not. We loaded our gear on the boat and made our way out for the first boat ride. If you've never been to North Carolina then you should know that every boat ride you are on is an exciting one because so many of their days get blown out by the weather. From our trip alone we only made 70% of the dives we were scheduled to go on.

The diving in North Carolina was seemingly nowhere near as good as what I had heard of or seen from photos and videos that dive buddies and friends had shown me in the past. We were stuck doing mostly inshore wrecks due to some rougher than desired seas further out by the off shore wrecks. This was very disappointing to us as the crown jewel of our trip was an offshore wreck...the U-BOAT (U-352). Every time we boarded the boat, we'd remind the crew that the 352 was really the ONLY reason we were there in the first place. There was, of course, nothing they could do as it wasn't there call nor could they control the seas.

We did 3 days of diving the in shore wrecks which were ok the first time we dove them but quickly got somewhat boring. The only thing that kept them fairly interesting after the first dive on each were the sharks that we saw on the wrecks. As interesting and cool as the sharks and sea life was on these wrecks they were still just barely worth the trip all the way to North Carolina because the visibility was 12-15 feet at best due to the rougher seas off shore.

We finally got word that we were going to be heading to the u-352 on the last day of our trip. This was news that was music to our ears. We still didn't know what to expect because the crew said the seas were still a little rough and we were sure we were going to make it but the captain was going to try his best. Once underway, the seas got the best of a couple of us on the way out to the first dive of the day, THE AEOLUS. It was something that were looking forward simply for the fact that it was a new wreck that we hadn't yet dove (the same 2-3 wrecks for a few days can really be depressing when you spend the money to travel and stay somewhere).

Rich and I were among the first to splash and the crew had grown used to the fact that we were good divers and submerged as soon as we hit the water. It was clear (literally) that the visibility was significantly better than the inshore wrecks we had been diving. All things considered, this was an AMAZING wreck to dive for several reasons. It was easily and SAFELY penetrated. It had multiple levels that were easily accessible. There were more fish on this wreck than I've EVER SEEN ANYWHERE and mostly, there were 3-4 sharks swimming around at all times. Needless to say I WAS REALLY HAPPY AND IMPRESSED. North Carolina was finally living up to its reputation.

The surface interval was not kind to most of us as the rough seas and the diesel fumes had hit 1/2 the boat and had 8 or 9 of us "tossing our cookies". it was a slow long ride to the crown jewel of North Carolina wreck diving... THE U-352! A slow steady ride assured a little time as possible standing still in the rough seas that we had. Rich and I were eager to get in the water ASAP due to the new found love we had for North Carolina after just having such a successful dive on the AEOLUS

The boat stopped and someone from the crew quickly splashed to expedite us getting in the water. We were all amazed upon entering the water. The U-352 is sitting in 110 feet of water and it was VISIBLE FROM THE SURFACE with your mask in the water. We were all stoked. I usually don't waste any time dropping down and descending on a wreck but the sight of this had me in awe and you can bet that I took my time descending on this historical site to enjoy the view all the way down. Rich and I continued our dive (along with the rest of the divers) and enjoyed every last second of the fantastic viz, amazing bottom conditions and awesome company. I think the video can speak for itself..... 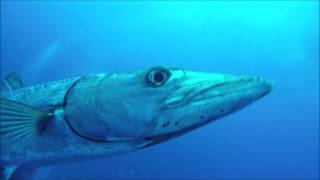 Now You Can Blog from Everywhere!

ScubaTechie Liveaboard Trip to Maldives in 2019

We will be having a FREE sidemount clinic at Dutch Springs this Friday/Saturday (10/13-10/14). If yo